“The pen is the torch, my words the flaming trail, our thoughts the many lighted roads the world has yet to unveil.”

Welcome to Andover… where superpowers are common, but internships are complicated. Just ask high school nobody, Jessica Tran. Despite her heroic lineage, Jess is resigned to a life without superpowers and is merely looking to beef-up her college applications when she stumbles upon the perfect (paid!) internship—only it turns out to be for the town’s most heinous supervillain. On the upside, she gets to work with her longtime secret crush, Abby, who Jess thinks may have a secret of her own. Then there’s the budding attraction to her fellow intern, the mysterious “M,” who never seems to be in the same place as Abby. But what starts as a fun way to spite her superhero parents takes a sudden and dangerous turn when she uncovers a plot larger than heroes and villains altogether.
Genre: Young adult, Superhero, Fantasy, LBGT (f/f)
Rating: 5/5

This is going to be the first book that I give a full rating too, because it’s rightly deserved. Not Your Sidekick is honestly the best book I have read this entire year for so many reasons!

Let’s just start off with how aesthetically beautiful this novel is! Along with the cover image, which features Jess and the “mysterious M”, each chapter begins with an image in the same orange and yellow hues that appear on the cover. I love this art style and the colors capture the Nevada desert landscape that serves as the backdrop for much of this story. I visited southern California for the first time a month ago, and got to explore Joshua Tree while I was out there. The author, C.B. Lee, really captured what I remember of driving through the mountains and the desert, making me feel almost transported right back there.

Moving on to the actual content, I love how Lee takes this superhero genre, which has honestly been played out and worked to death for years now, and is able to bring it to life by infusing her own background into the main character. Jess is a teenage girl growing up 100 years after “the Disasters”, when major radiation hit the Earth, causing mass imbalance of the ecosystem, reforming of nations, and has awakened the meta-human gene in a select percentage of the population. Jess is also not your typical face for the “hero” – she’s a first generation Vietnamese American and she’s bisexual. She’s the daughter of Andover’s most prominent heroes, Smasher and Shockwave, and the sister to an up-and-coming superhero, Claudia, and a scientific prodigy, Brendan. Jess herself has been average at best, not displaying any powers and it may be too late for her to expect any change. Her life takes an unexpected and ironic turn when she accidentally accepts a job offer from her parents’ arch-nemeses, Master and Mistress Mischief. Instead of running away, Jess climbs on board saying that it’ll be “hilarious.”

And it was hilarious, in the sense that Not Your Sidekick stays aware of every stereotypical trope of superheroes, and finds a way to either point at its absurdity or turn it on its head. Along with calling out the absurdity of how the hero somehow never can figure out the identity of the shadowy figure (case in point, Jess doesn’t figure out who ‘M’ is until damn near two-thirds of the way through), Lee builds up scenes where Jess, a girl with no powers of her own, becomes the hero and saves the day. We even get a taste of the notorious villain monologue, and everyone is aware of how ridiculous it is. This playful jest at heavy-handed plot devices makes for a comical atmosphere, but this novel stays out of the zone of satire, not only maintaining the real dangers of superheroes blending with non-powered society, but touching on the real world issues of today, including nationalism, racism, sexuality, and if the “common good” really is good.

Though readers may come for another superhero story, what makes you stay is the detail to the person, and the fact that despite what others may say, an Asian woman absolutely fits perfectly fine as the main character of this story. In fact, I think the fact that Jess has an intersectional identity makes this story so much better. When Jess isn’t worrying about not measuring up to the rest of her family’s abilities, she’s worried that she doesn’t really fit in with her culture. As a first-gen daughter, she was sent to “Chinese school” to learn the language, but is far from fluent, and has little connection to the culture of her parents and ancestors. On the other hand, Denise Ho and Elizabeth Phang, also kids of immigrants, make fun of the very things that Jess seems so desperate to tap into, citing one of Jess’s favorite restaurants run by southern Asian immigrants “fobby.” These girls represent a double sided coin of first-gen children, in which kids struggle with trying to reach for their roots, or deciding to Americanize. Lee is clearly engaging in the commentary on this subject that has existed for a while now, utilizing it to create more depth, and highlight all the ways Jess experiences feeling like an outcast.

Jess’ sexuality adds another layer that I love on a very personal level. Being not only into girls, but bisexual, is an awesome addition to this, especially considering the issue with bi-visibility that we’re having right now. This gets an A+ as well for creating a space for queer Asians, which I think hasn’t been allowed to exist in the media very much until very recently. Jess’ crush on Abby is absolutely adorable and relatable, as she tries not only to manage her composure around Abby, but navigate if Abby even is attracted to girls as well. Besides that, we have Jess’ best friend, Bells, who is a transgender man! Everything about Bells is so cool and perfectly integrates his gender identity, Louisiana creole heritage, and personality into his character. I’m super excited that we’ll be seeing even more of him in the already announced sequel, Not Your Villian.

I honestly don’t want to give away too much about this book, because I much rather everyone go and read it themselves. It’s absolutely worth paying full price for, because I promise you, this is not your average superhero story. Lee has created something that is not only dynamic for the entire genre, but integral for the movements of both creating space for more Asian leading characters and queer characters. This is the book that I want to see made into a movie, right up there with Luke Cage and Black Panther. I think it’s far past time that people of color must be resigned to only being the sidekick.

You can buy Not Your Sidekick today in paperback or Kindle e-book from Amazon! Keep up with more of C. B. Lee’s projects by following her on Goodreads, Facebook, Twitter, or her official site! 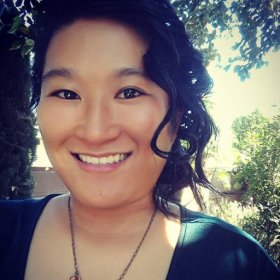 C.B. Lee is a bisexual writer, rock climber and pinniped enthusiast based in California. She is a first-generation Asian American and has a BA in Sociology and Environmental Science, which occasionally comes in handy in her chosen career, but not usually. Lee enjoys reading, hiking and other outdoor pursuits. Her first novel, Seven Tears at High Tide, was published by Duet Books (Interlude Press) in 2015 and named a finalist for two Bisexual Book of the Year Awards. Ms. Lee is also a Lambda Literary Emerging LGBTQ Voices Fellow.

2 thoughts on “The Writer’s Will Reviews: Not Your Sidekick by C.B. Lee”